In some ways, brands and attendees of Paris Fashion Week are experiencing dejà vu of March 2020 as the shows continued to go on despite the Coronavirus having already landed in Italy, a neighbor to France on the Southeast border. There was an ominous feel in the air, questioning if it was appropriate and dreading what was to come once it was over. Now, a similar mood has taken over PFW Fall 2022 as designers and attendees go about what appears to many as frivolous, glamorous work as a humanitarian crisis unfolds among the one million-plus and counting refugees who have fled Ukraine. Like the events of March 2020, though, the industry is rallying around this cause in the name of humanity, helping in ways they can.

From the top came Ralph Toledano, President of the Fédération de la Haute Couture et de la Mode. Toledano first called on brands and attendees of Paris Fashion Week to practice ‘solemnity’ as the week began but has now asked its 100 members to donate to the UNHCR, the United Nations Refugee Agency, according to an article in WWD. The UNHCR appears to be the fund of choice by the industry as brands such as Ferragamo, Loewe and PR Consulting, a luxury brand pr firm whose role usually would be to promote actions such as these by its clients instead of encouraging donations on their company Instagram feed. Gucci pledged to send $500,000 to UNHRC as well. Messika, the Parisian jeweler, announced donations to Foundation de France, a fundraising organization raising money for the refugees.

Among the first to show some support was DressX founders Daria Shapovalova and Natalia Modenova, two Ukrainian nationals who founded Mercedes-Benz Kyiv Fashion Days and the More Dash Paris showroom. The pair released several NFTs in the Ukrainian flag colors for sale the day after the invasion whose proceeds would be donated to the effort. As of March 2, Shapovalova noted on LinkedIn they had raised over $14,000, which was sent directly to the Ukraine Ministry of Defense and other Ukrainian charitable funds donating to the military, which has also been comprised of a civilian brigade.

Kering was among the first major luxury groups to announce they would make a “significant donation” to supply aid for the Ukrainian people. LVMH followed suit to the tune of 5 million euros. Renzo Rosso’s OTB Foundation also stepped up, committing sizable donations. OTB is the parent company of Diesel, Maison Margiela, Marni, Jil Sander and Viktor & Rolf.

But donations weren’t the only way brands were stepping in. Hermes is among the first luxury brands to announce they will cease doing business in Russia today, March 4, the company’s LinkedIn page. According to Reuters, Cartier-parent company Richemont, who closed last week and then reopened stores according to Vogue Business, has also shuttered its stores in Russia again. (Update: Since this initial posting Kering and Chanel announced they will suspend all retail operations in Russia as well according to LinkedIn posts. According to BoF, LVMH and Nike have also taken that step. The publication also ascertains that logistics influenced the decision to close for these luxury houses more so than a moral quandary.)

Mass fashion retailers H&M and Mango have announced store closings in both Russia and Ukraine and are focusing efforts to help employees there. Vogue Ukraine has been publicly urging all top luxury conglomerates to stop doing business in Russia.

Natasha Cowan, journalist and producer of the @suzymenkes podcast shared the story of Ukrainian brand Litkovskaya on Instagram. The designer Lili Litkovskaya fled Ukraine the day of the invasion with her toddler daughter and has according to the brand’s website ceased sending deliveries of orders to Russia as the war broke out and urged those visiting its website to support the Ukrainian Army. Instead of showing her collection at the Tranoi tradeshow, she is showcasing QR codes to 45 other Ukrainian creatives underneath a Ukrainian flag with the support of the FHCM’s Pascal Morand and Boris Provost of the Tranoi. Litkovskaya is planning a rally at the Place de la Republique in Paris on Saturday and urges the fashion community to join in supporting the cause.

Balenciaga, whose designer Demna Gvasalia was born in Georgia in 1981 then part of the USSR, showed a yellow and blue look on the runway specifically in support of Ukraine and has ostensibly erased its Instagram feed save one post of the Ukraine flag. Max Kibardin, fashion designer and creative director of Russian nationality and Italian citizenship, is filling his Instagram feed daily speaking out against Russia’s actions and showing support for Ukraine

On the Instagram account of 1Granary, a global platform designed to support fashion graduates founded by Olya Kuryshchuk, a Central Saint Martins’ graduate and Ukrainian national, an open letter called Fashion Unites Against War has also called upon brands to cease business dealings in Russia, noting on its feed the power fashion has. “Fashion is a trillion-dollar industry with gigantic cultural, economic and even political influence…But our supply chains connect countries across the globe, our media reach masses of followers everywhere, our shared language of creativity is universal.”

According to Reuters, Jeffries Financial Group reports Russia accounts for $9 billion in luxury spending a year. Morgan Stanley estimates that “Russia nationals account for less than 2 percent of Kering and Richemont worldwide sales, including Russian spending abroad,” according to Vogue Business.

For many at PFW, it’s a matter of doing one’s job regardless of country or political stance. Riccardo Tornado is the Fashion Director for Tsum in Moscow, the largest and most fashionable department store in Russia since 1908. He is attending the European fashion shows and is currently in Paris. He issued me the following statement via Instagram DM. “We are all sad and worry about the situation and we look forward to peaceful resolution.”

French President Emmanuel Macron has warned of the effects of the war on the French, namely in the form of rising fuel costs and other everyday items. The fashion community will likely have to sacrifice business to stand on the right side of history and forgo business dealings with Russia while the war continues.

The usually dark, somber soundtrack at a Rick Owens was replaced last minute by Gustav Mahler’s Symphony No. 5. The designer told reporters backstage that his initially chosen soundtrack had beats he thought sounded like shelling and gunfire. The designer left a personal message on his collection notes handed out to guests. “I have always found great comfort that in the history of the world, good has somehow always managed to triumph over evil. During times of heartbreak, beauty can be one of the ways to maintain the faith.”

At the usually raucous and cheeky Roger Vivier presentation during PFW, creative director Gherardo Felloni turns a ‘maison particular’ aka mansion into a playful fantasy world for the brand’s shoes and bags; this season a moment of silence was recognized for all of those suffering due to the Ukraine invasion.

Isabel Marant wore a blue and yellow sweatshirt backstage at her fashion show while making a Tik Tok with Gigi Hadid. Eva Chen, the director of fashion partnerships at Instagram, donned a yellow sweater and stood against a bright blue wall in an Instagram post. She urged followers to donate to Sunflower of Pease, a non-profit organization providing aid for Ukrainians. Even Bryan Boy, a major influencer with over 685K followers and a campy sense of humor, has used his feed to support Ukraine. Posting footage of the invasion, magazine covers pleading for Russian people to demand Putin stops his war of aggression and adding a link to donate to the Ukraine Armed Forces, asking those to follow him in supporting the cause.

Sat Mar 5 , 2022
A squint is an example of a facial gesture that MagTrack can detect and issue a discrete command to control a connected device. Credit: Georgia Tech Brooks Rehabilitation recently announced that the MagTrack study, a collaborative research endeavor with the Georgia Tech School of Electrical and Computer Engineering, has been […] 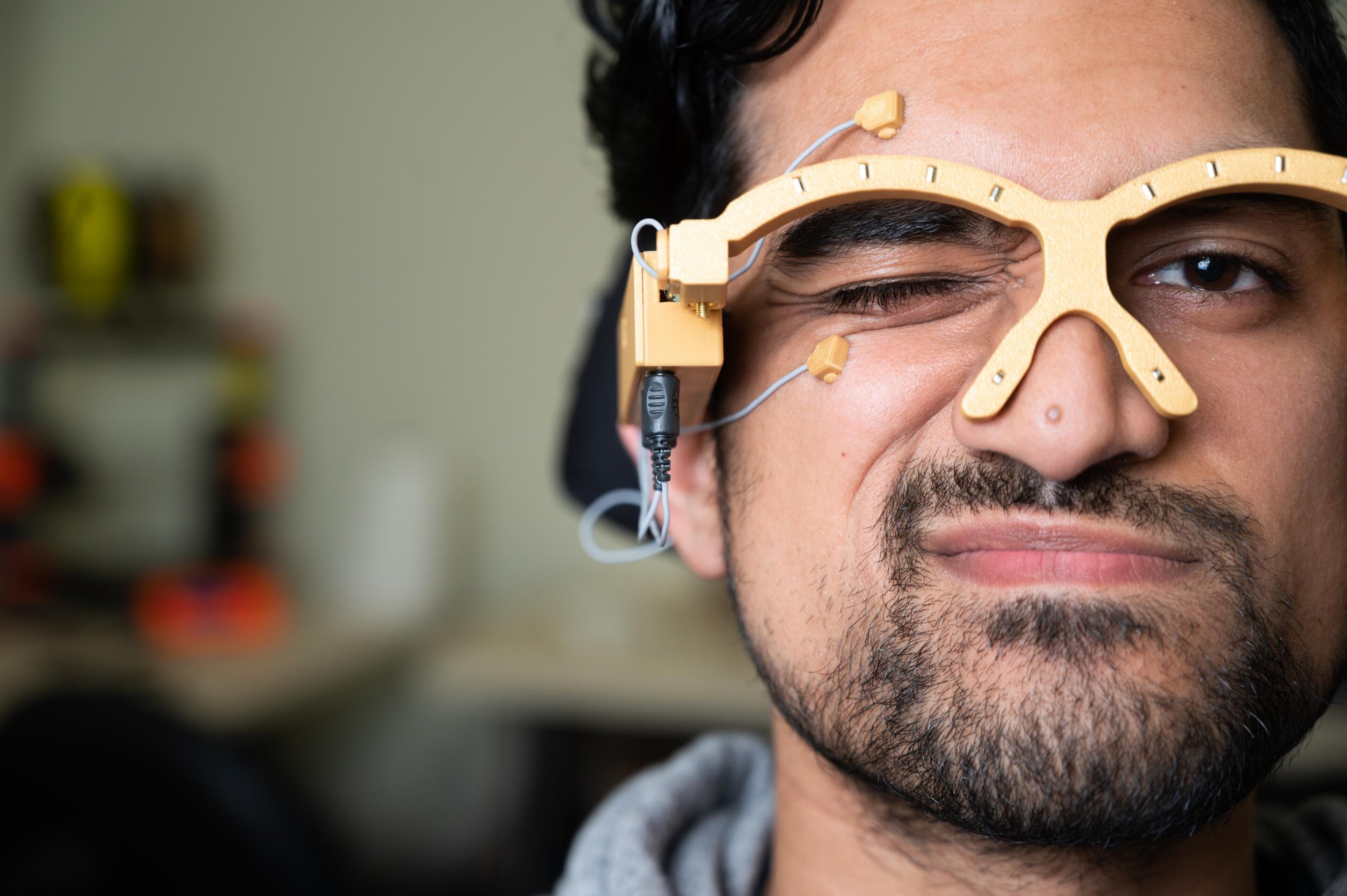