Rancho Pescadero will be 30 acres of beachside serenity with a tiny footprint. share this article In the beach town of Todos Santos, an hour north of Cabo San Lucas on Mexico’s Baja Peninsula, sits a hotel that’s been offering a restorative antidote to modern life (and, let’s face it, […]

Rancho Pescadero will be 30 acres of beachside serenity with a tiny footprint.

In the beach town of Todos Santos, an hour north of Cabo San Lucas on Mexico’s Baja Peninsula, sits a hotel that’s been offering a restorative antidote to modern life (and, let’s face it, Cabo life) since 2009.

It’s called Rancho Pescadero, and it’s been both a luxury bolt-hole and a beacon of sustainable hospitality since its inception. Now, owner Lisa Harper wants to raise its game even further, with a multiyear transformation and expansion due for completion this year that aims to position the hotel at the vanguard of regenerative travel.

Harper, a former CEO of several brands (including Gymboree and Hot Topic), landed in Todos Santos in the ’90s. She came for a break from the corporate world and camped for 11 months on a beach known for its world-class surf. (“I’m not a great surfer but I was a good paddler,” she admits.) She fondly remembers those early days, keeping an eye on turtles in the water and satellites in the clear, dark sky, picking fresh basil to make pesto. It was the “antidote to living in San Francisco,” she says with a smile.

By 1997 she’d bought a plot of land that had historically been used to grow poblano peppers and eventually opened up a 12-room hotel staffed by locals. Her hiring strategy was a little different: The focus was on passion and enthusiasm over experience. Many of the first employees were farmers or fishermen who had never been in a hotel. They were assigned roles in the housekeeping or kitchen departments based on their interests, trained in the arts of hospitality, and many of them remain with the company. “Our head housekeeper was one of the people who showed up and said ‘I want to get into housekeeping’,” she remembers.

Over time, Harper bought parcels of contiguous land and closed the hotel in 2018 for the rebuild. Late this summer, Rancho Pescadero is set to reopen with 103 suites and oceanfront villas set among nine gardens, spanning 30 acres by a 2.5-mile empty beach known for its surf. It will include a restaurant and farm with an “ethnobotanic culinary concept,” a huge wellness center with an outdoor gym and a lap pool surrounded by palm trees. The rooms promise wooden-beamed ceilings, comfy furniture, and plenty of plants and pottery, while the villa bathrooms are tiled in myriad shades of green and have outdoor showers and ocean views. Meditative, relaxing outdoor spaces abound.

Harper says she wants guests to “cross over” to a modern Narnia as they roam interconnected gardens beside sand dunes at the base of the Sierra de la Laguna range, finding peace (if not gryphons) among this relatively undeveloped stretch of coast. 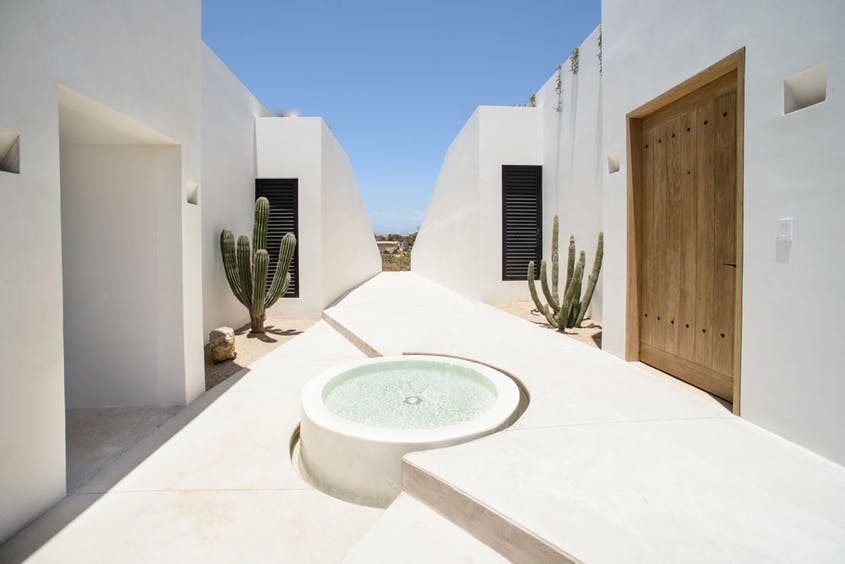 Creating a model of stewardship

The new hotel will be a haven of sustainability and self-sufficiency. A huge solar farm on the south side of the property will provide 100 percent of its power needs within a couple of years; a well will provide irrigation, along with a graywater system; and a desalination plant is planned for other water needs, including an onsite bottling plant.

Guests will notice the solar and the desalination and will have opportunities to learn more if they’re interested. They’ll also be able to learn about regenerative gardening—or mix their own massage oils in the apothecary. “It makes them feel good about the choices they make,” Harper says. “My goal is to lead by example. We’ll probably skip the waste water treatment—that’s not so fun.”

A trash incinerator is also being planned in conjunction with environmentalist Paul Hawken (author of Regeneration: Ending the Climate Crisis in One Generation) for further down the line. “We want to do it without the fumes or the exhaust and use it for energy,” Harper says. “My daughter’s school in Switzerland does it. If they can do it, we can figure it out.”

Transportation will be by electric cart or bicycle. Paper and plastic bottles will be banished, naturally, and most food will come from the immediate vicinity. “It’s a farm extravaganza round here,” Harper says. “A lot of organic farming is done here that’s exported to the States. [Most of] the fish are caught about two miles away and brought over in the afternoon.” In fact, she says that 90 percent of the food and drink will come from within 50 miles of the hotel—and from the property itself in the case of the goats and chickens. 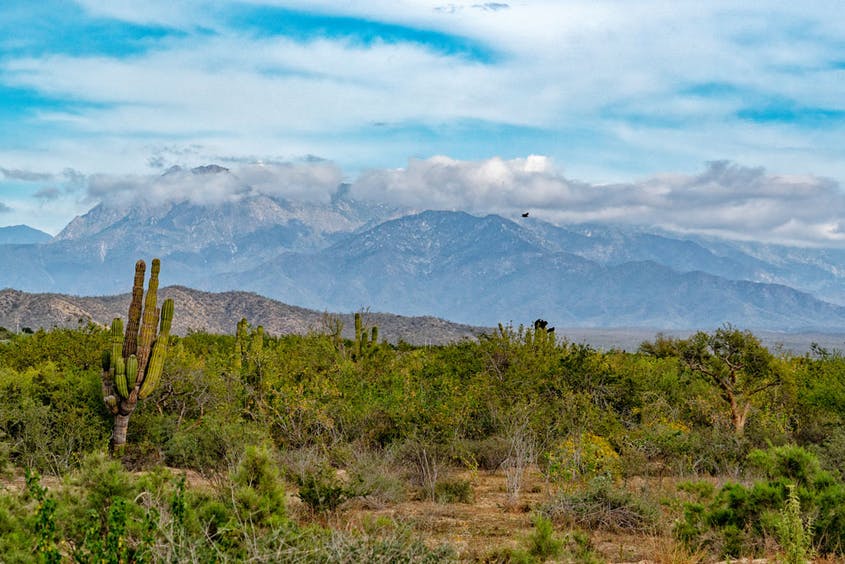 Preserving and enhancing the natural landscapes

The area’s natural beauty is what drew Harper here in the first place, and she’s keenly aware of the need to preserve and conserve the flora. Her team is replanting vegetation that was moved during construction, ensuring that over 50 percent of the acreage is made up of indigenous plants.

Her enthusiasm is clear as she talks about cataloging and replanting under the guidance of a botanist, citing a CEO-pleasing “92 percent success rate in terms of transplanting them,” and recalling the environmental consultant who got emotional on returning to the project to find that they did what they said they were going to do. “Many people say they’re going to do this and they don’t,” Harper recalls her saying.

When the hotel reopens, dozens of former employees are expected to return—some 40 percent of the team. Several others have started their own businesses in the meantime, including a bakery and a taco stand. After returning employees are accounted for, recruiting will begin among the local community before extending further afield in Mexico.

Staff will be housed in one-, two-, or three-bedroom homes with their families, where they will pay “a very minimal amount for utilities and upkeep.” If they work for 10 to 12 years, they’ll own the properties. Once the 300+ employees are sorted, Harper intends to focus on affordable housing, childcare facilities, and a technical school for the broader community. At the school, residents will learn marketable trades—things like accounting, computer security, or HVAC qualifications, “moving past gardening and housekeeping . . . building skill sets.”

Employee housing will be ready for the first residents by June, with full completion expected in a year. Non-employee, local-resident housing will follow. They’ll break ground on the technical school this year.

All of the above involves a great deal more time and money than simply opening a luxury hotel. But while Harper insists this is a “legacy project” and is about doing the right thing, she also wants to show that the return makes it all worthwhile. As she has it, aspects that aren’t calculable on a balance sheet are immensely valuable—for the environment, the community, and the business. “My goal is to show that if you do the right thing, you get paid back for it.”

>> Next: The Best New Sustainable Hotels

How home improvement funds upgrade your new house to a home

Sat Mar 19 , 2022
A workman measures uses a rafter to mark a beam for trimming at a new housing site in Madison County, Miss., Tuesday, March 16, 2021. If you’re getting ready to buy a home, you’ve probably been saving for the down payment and other closing costs. A home improvement fund can […]