STURGEON BAY – You might not think an international fashion model and actress would care about the fashion concerns of women in the everyday world. Maybe she’d give some thought to growing environmental concerns, but it’d be secondary to her life in front of the camera. Sharon Hinnendael has those […]

STURGEON BAY – You might not think an international fashion model and actress would care about the fashion concerns of women in the everyday world. Maybe she’d give some thought to growing environmental concerns, but it’d be secondary to her life in front of the camera.

Sharon Hinnendael has those concerns, but instead of just paying lip service to them, she turned them into Sustainable Style Door County, a secondhand fashion shop in downtown Sturgeon Bay that carries affordable clothes and accessories that otherwise are likely headed for a landfill.

“It’s beach sandals and tank tops to super-upscale fur coats to full-length gowns, and everything in between. There’s something for everyone,” Hinnendael said.

Two years ago, the Green Bay native was living the supermodel life in Mexico. She’d been working as a model for a little more than 20 years, since she was 12 years old, and was (and still is) represented by the world-famous Ford Models agency. Hinnendael posed for clients such as Gucci, Abercrombie & Fitch and Coca-Cola, as well as a photo shoot with actress Penelope Cruz for Vogue.com, and she’s acted in TV commercials, about a dozen movies and had one of the lead roles in the Showtime series “Look.”

But Hinnendael was in what she called an abusive marriage and had two children under the age of 2. So, with her parents now living in Sister Bay, she moved back to Northeast Wisconsin, got a divorce and custody of the children, and looked for ways to put her fashion experience to use between modeling gigs.

She said her modeling experience helps her make suggestions and recommendations for customers who have questions or are seeking the right look for themselves.

“I shot for so many brands all over the world,” Hinnendael said. “I would hear this marketing person say, ‘Oh, let’s put this top on this model because she’s blonde and the pink top will look good on her and bring out the blue of her eyes.’ I’ve just been in a lot of rooms with a lot of models and heard all that expertise and knowledge.

“And now I’m using it for my own store. … We’ll ask what colors they like, what parts of their body make them feel good.”

Hinnendael decided to launch a shop that would use her fashion sense to offer secondhand clothes that she felt were stylish and of better quality, and at an affordable price. She searches for items that would fill that bill, repairing and upgrading them as necessary. She’s found a number of thrift stores as far away as Milwaukee and Madison where she digs for her goods, as well as Goodwill and St. Vincent de Paul outlet stores that carry items that have been on the shelves of the regular stores too long and are very deeply discounted.

“I’ve found designer clothes there, fur coats there,” Hinnendael said about the outlets. “I will spot-clean them, add and fix buttons and zippers, sometimes add embellishments to make it look cooler. I have some things that are made with such quality, they’re better than you’d find in a boutique.”

That accounts not just for the “Style” part of the business name but the “Sustainable” part as well. Hinnendael said she realized while she was diving into the carts of clothes at the outlets that this was their last stop before they were thrown onto the trash heap, literally.

“When I started to go to these outlet stores, I started to realize how many of these things were being thrown out,” Hinnendael said. “It made me realize we have to do something about it, as much as we can.

“Because I’ve been a model so long, a lot of my model friends have clothes that have been gifted to them, and they’ll send boxes of them to me. (But) my preference is to go to the thrift stores, dig around and prevent clothes from going to the landfill.”

FOR MORE DOOR COUNTY NEWS:Check out or homepage

Hinnendael launched an online store on the popular vintage clothing website Poshmark in June 2020, “selling to friends and family,” she said. She opened her brick-and-mortar shop Aug. 1 in the former Nicolet Bank building on North Fourth Avenue with the help of a $10,000 grant from the state’s Main Street Bounceback program.

“My dad saw online there was a grant program for businesses that were moving into buildings that were old businesses,” Hinnendael said. “It was giving grant money to businesses to start something in spaces that had been vacant.”

Hinnendael can consult with customers on fashion ideas if desired. She’s not always in the store — besides her trips to thrift and outlet stores to dig up more clothes, she still takes modeling gigs, and there are the two children as well.

But Hinnendael said if she’s not there, customers can shop in the store and pay for items through mobile payment service Venmo, and her business partner, Wendy Shepard, can answer questions at Shepard’s children’s boutique next door, Fairy Tale Couture. Customers also can contact her for a consultation on the FaceTime app, and she hopes to eventually set up a screen in the store for FaceTime consultations.

She said the goal is to help her customers feel good about themselves. She added that she’s willing to work on prices with women who are down on their luck, maybe looking for a better job or experiencing other hardships that might make it difficult for them to find nice, better-quality clothes.

“The whole point was to share my fashion knowledge,” Hinnendael said. “But most importantly, I want women to come in here, it doesn’t matter how much money you have, I want you to look good and feel good about yourself. … I want women to know, especially if they’re going through a hard time, maybe they’re looking for a job and need to look professional, I’m willing to help.

“The point was to save clothing from going into landfills and to make women feel good.”

While it might seem what would be considered fashionable in places like New York or Rome wouldn’t necessarily play well in Door County, Hinnendael said she believes good fashion is good fashion everywhere.

“I would say women are the same everywhere. They want quality,” she said.

And the results have been positive so far, Hinnendael said.

“We’re getting photos of (customers) saying, oh, they feel so good,” she said. “That’s why I’m doing this — to give them confidence so they can go out in the world, be a better mom or a better woman or be more confident at work.”

Fri Apr 15 , 2022
MIDDLETOWN – On a Sunday morning in February, five High Technology High School students met at 16-year-old Andrew Eng’s house to start a math competition that blended data science, computer programing and critical thinking to model the future of remote work.  Once they clicked start, they had 14 hours to […] 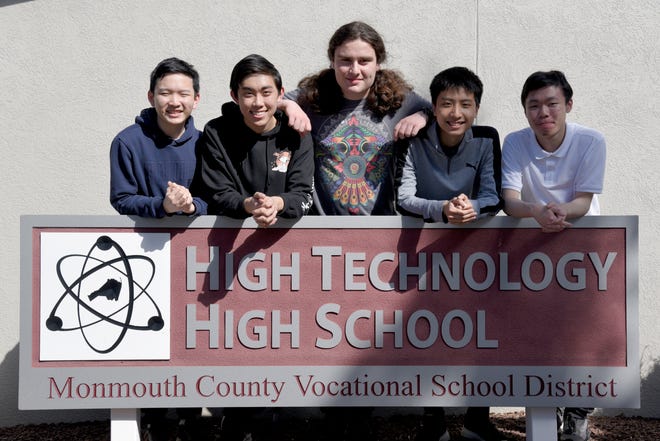